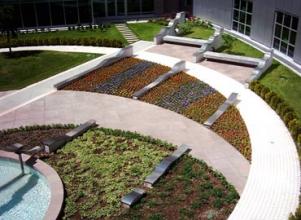 Tags:
green roof
urban greening
building
environment
Urban Greening - What's That?
When I tell people that I do translations and editing in the area of urban greening, I often get blank looks. Some people nod politely and then go off shaking their heads a bit after I’ve given them a very brief explanation, others summarize, not too wrongly, as ‘so you mean it’s about planting a few trees around the city’.
Basically, urban greening does mean planting things in towns and cities. It deals with bringing nature back into built up areas. It turns concrete jungles into, well, concrete and plant jungles.  Urban greening makes our towns and cities prettier. It provides us with parks, shady streets, borders of flowers and green oases dotted around the grey.
Not only does urban greening make our surroundings look nicer, it also improves our physical, emotional and psychological health. Urban greening improves the quality of the air in built up areas. The plants filter out pollution, absorb carbon dioxide, release oxygen, dampen noise, help use rain water runoff more efficiently, and generally are good for the environment.  Urban greening also helps reduce the heat island effect.
Heat island, what’s that? Built up areas are often warmer than the surrounding countryside. The buildings store heat during the day and only release it slowly during the night, unlike plants which can regulate the temperature much more efficiently. People also generate heat in their daily activities (electrical appliances, central heating, air conditioning, vehicles, etc.).  All of this means that towns and cities are islands of heat in the surrounding countryside.
In short, the quality of life in a town or city can be greatly improved with urban greening.
Urban greening is not just something which town councils and urban planners do though. We do not need to look to the powers-that-be to bring nature into built up areas. Everyone can do their own bit to make their town or city prettier. If you have a balcony, plant it. If you have suitable window fixtures, put out flower boxes. If you have a flattish roof, look into turning it into a green, or eco, roof. If you have a patch of dirt outside your front door, plant something there. If you have a garden, go wild. You’ll be doing yourself, your neighbours, the dog two streets down, insects and animals, and future generations good.

What is a Green Roof?

Basically, a green roof (or eco-roof, or planted roof) is a roof which has got plants on it. These can range from what might look like a selection of succulents (actually sedums), or even weeds (actually larger flowering sedum or wildflowers), to intricate and extensive parks – even golf courses!

There are three main categories of green roofs:

Intensive green roofs tend to be larger and can support large plants, trees and a proper lawn. This kind of green roof is normally planned before the building is put up and is intended for use (parks, walkways, sports grounds, private gardens, etc.) They generally require quite a bit of maintenance.

Extensive green roofs are the easiest to care for. The roof is planted with a thin layer of generally hardy and native vegetation which is resistant to the weather and which does not need watering. This kind of green roof is ideal for lightweight roof systems and smaller budgets.

Green roofs in urban settings have been around since the 1960s but have really become popular in the last decade or two. It is best to consult an expert if you are interested in creating your own green roof because drainage, waterproofing and planting layers need to be installed. Don’t be put off by the cost factor. You’ll find you save a lot of money in heating / cooling costs in the long run.

Why a Green Roof?
So, after talking about the “What a Green Roof is?”, let’s talk about why you might actually want a green roof. Green roofing is the new trend. Green roofs are popping up everywhere and sometimes take on the most extraordinary and elaborate forms. There are some true works of art out and about. Green roofs can also be very simple, low-budget affairs and can be tuned to meet all tastes, requirements and budgets.
Apart from simply looking nice, green roofs have many advantages. Here are just a few:
If you happen to have a nice, flattish roof which is stable then you can enjoy your own garden without paying the property premium in built up areas. You can create your own oasis on your roof, much farther away from prying eyes than street level could allow. From container planting to a full landscaped paradise, from low budget to high end, the choice is yours.
Gardens and plants of any sort are green lungs. Built up areas, especially cities, often lack drastically in green spaces and nature. By creating a green roof you are improving the urban climate.
Green roofs beautify built up environments. Seeing a row of trees or shrubs or trailing plants on the skyline has a real appeal which must not be underestimated. You could create your own privacy screen while giving passers-by something to look at.
Apart from improving the urban climate and reducing pollution, a green roof can become a micro-habitat for insects, bees and birds. Green roofs create new living spaces for creatures. The knock-on effects of this are still not fully known, but they could help save some endangered species and definitely help them survive and thrive.
Green roofs also help with water and insulation management. On the one hand, there is less rain water running off the building and into the sewage system and so less risk of flooding. The water which does run off has often been filtered by the soil and so is cleaner. On the other hand, less heat is lost through the roof in winter or is let in through the roof in summer when there are plants on it. This has a direct effect on a buildings heating and / or air conditioning costs.
Even if you do not have a flat enough roof, you can still probably create a green roof of sorts. Maybe you have a carport or garage with a flat roof. Most can easily be converted into a light-weight wild flower paradise for bees, butterflies and insects at minimal cost. Failing that, you could even green a balcony (using containers) – but more on that in a later post.
If you are interested in learning more about green roofing, or want to create your own rooftop garden paradise, look up your nearest green roof expert on the internet. Most communities and cities will have at least one representative who can help you.
Here are some links to examples of green roofs:
http://www.thecoolist.com/green-roof-design-10-stunning-sustainable-work...
http://www.houzz.com/roof-garden
http://freshome.com/2012/10/17/30-rooftop-garden-landscaping-ideas-or-ho...
Category:
Environment

I learned a lot from the

I learned a lot from the article. But if you are a Hotmail user, I think hotmail com login is the website you should bookmark, in case you have email problem or want to learn some helpful tips to use email more effectively.