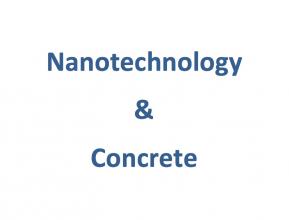 In my first year at the Nanotechnology Engineering program at Waterloo, I was put through every test I had been solemnly warned about by senior nano students. From the feared Organic Chemistry final to the dreaded job-hunt looking for (non-existent) ‘Nano-related’ employment, I can proudly say, I managed to stumble across the finish line of first year. In the end, as the dust settled, I landed a CO-OP job – in Saskatchewan – at a civil and geotechnical engineering firm. I was thrust into a world of concrete & construction, soil & steel-toed boots. One of my main responsibilities included visiting work sites around the city testing and making sure the concrete purchased by our clients was up to mark.

At the face of it, my job had nothing to do with Nanotechnology. After all, nothing in my eight months of formal Nano-education could prepare me for a stint in a world known fondly as the ‘adult sand box.’ The common perception of nano-engineers as scientists in lab coats holed up in a sterile research laboratory is poles apart from the image of civil engineer in a hard hat covered with concrete from head to toe! However, as CO-OP term progressed, I started to realize the scope of nanotechnology applications on one of the oldest, and the “single most commonly used construction material in the world” (Raki, Beaudoin, Alizadeh, Makar, & Sato, 2010).

While research into nano-medicine and nano-electronics have been on going, concrete Nano science is an uncharted territory that can prove to not only bring about a green revolution to the construction industry, but also further our understanding of an ancient material to humans – often taken for granted. Research areas recently proposed by the National Resource Council, target “improving concrete properties by modifying the structure of cement hydrates, addition of nanoparticles and nanotubes and controlling the delivery of admixtures” (Raki, Beaudoin, Alizadeh, Makar, & Sato, 2010). This in turn, can lead to “increased durability, decreased brittleness and increased tensile strength, and routine use of large volumes of non-traditional materials like fly ash.” I will try to highlight some of the key improvements nanotechnology can bring about in concrete

Essentially, concrete is a unique “porous liquid-solid composite” (Garboczi, 2009). It consists of a specific ratio of binding glue, i.e. cement, filler substances such as sand and rock aggregate, and water. It is the hydration reaction between water and cement that continues for days and weeks after initial mixing that “gives concrete its strength” (Thomas & Jennings).

While on site, I quickly learned the different admixtures that were often used to alter properties of the concrete. Accelerators are used to increase the rate of cement hydration allowing the concrete to harden a lot quicker (quite helpful in cold Saskatchewan winters!) and retarders are admixtures that do the exact opposite. As a concrete tester, I also gained familiarity with admixtures such as air entraining agents that increased the amount of air voids in concrete to accommodate for its future expansion and super-plasticiser (super P) that increased the workability and flow of concrete. However, even with the use of super P, concrete loses it’s workability over time. Therefore, it has become all the more critical to be able to control “the timing of the availability of an admixture in cement systems” to optimize the chemical’s performance.

Control release technologies have already gained prominence in the medical and pharmaceutical industry where health specialists can ration the dose of the medication to avoid potential long-term side effects. In concrete science, numerous patents have recently emerged using different means to control the dose of admixtures to the concrete. One such method is that of encapsulation. Corrosion inhibiting admixtures were encapsulated in “coated hollow polypropylene fibres” to be activated “when conditions would allow corrosion to initiate in a steel reinforced concrete” (Raki, Beaudoin, Alizadeh, Makar, & Sato, 2010).

A well-known fact about concrete is that it is incredibly strong in compression, and can take loads larger 200MPa at its ultimate strength. Conversely, concrete is extremely weak in tensile and flexural strength due to it’s brittleness. Thus, cracks tend to propagate quickly as the concrete is put through undue stress in tension. As I saw on sites, to combat this flaw, engineers generally use steel rebar reinforcement when placing the concrete. However, a downside to this is that steel can rust, causing the concrete to crack and weaken. Another common practise is adding fibres in the concrete. Fibres also increase flexural strength, with the added value of being able to “interrupt crack propagation much more quickly than standard reinforcement material” (Raki, Beaudoin, Alizadeh, Makar, & Sato, 2010). However, again there is a downside. Fibres reduce workability and flow of the concrete along with cost. Researchers at NRC outlined benefits of moving from macroscopic to the nanoscopic level in terms of concrete reinforcement. The use of carbon nanotubes (CNT) in material science have already been documented to providing 117 times more tensile strength than steel and 30 times more strength than Kevlar (used in bullet-proof vests!). The use of CNT also provides an increase in Yong’s modulus and elastic potential, which means that the concrete can take greater loads without any potential permanent damage.

A possible reason why the concrete industry has lagged behind others in adoption of nano alternatives, might be due to the fact that concrete is so unique in itself. As E.J Garboczi argues in his paper, “Concrete is a material that is quite different from many other materials, and so NNC ideas need to profit from, but not be bound by, experience with other materials. Simply trying to duplicate advances made in other materials without adaptation to concrete is hampering the field….” Usually, the nano-engineered innovations we hear about involve “inserting nanosized solid particles into a solid matrix.” Essentially, concrete is a unique “porous liquid-solid composite,” thus, we have three places where “nanomodification can be carried out; in any of the solid phases, in any of the liquid phases, or at any of the water:solid interfaces” (Garboczi, 2009).