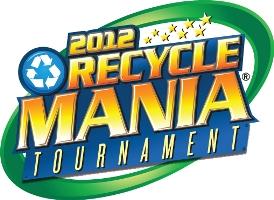 WASHINGTON, D.C. (April 16, 2012) — The ruckus heard across college campuses this spring was not just because of the NCAA collegiate basketball tournaments. It was also RecycleMania season at 605 colleges and universities. The RecycleMania Tournament, which wrapped up its 12th annual competition at the end of March, is an eight-week challenge that ignites classic college rivalries, rallying students, faculty and staff to increase on-campus recycling rates beyond their collegiate competitors.

This year, 92 million pounds of recyclables and organic materials were recovered, which prevented the release of nearly 150,000 metric tons of carbon dioxide equivalent (MTCO2E). This reduction in greenhouse gases is equivalent to the annual emissions from more than 25,840 passenger cars; electricity use of more than nearly 16,406 homes; or the burning of nearly 705 railcars’ worth of coal. Equally impressive, the aver

age recycling rate for participating schools increased from 27.61 percent to 28.49 percent over the course of the tournament.

The competition, which extended from Feb. 5 through March 31, included eight categories. The colleges and universities that took home top prizes in the three primary categories are:

To increase student enthusiasm RecycleMania held its second annual video contest with the theme “The Spirit of Recycling.” With the public invited to vote for their favorite from among the 28 videos posted to YouTube, the student submission from Florida State University garnered the most “likes” to win first prize followed by East Tennessee State University. Clemson University’s video received the Judges’ Award.

“One unique aspect of RecycleMania is that everyone is a competitor,” noted Bill Rudy, recycling coordinator at Brigham Young University and chair of RecycleMania, Inc. “No one sits on the sidelines. When students recycle, they add to their score, and if they throw something away, it hurts their school’s ranking. With the whole campus in the game, the competitive spirit spreads and recycling increases.”

The RecycleMania Tournament is an independent program of RecycleMania, Inc., a nonprofit organization led by recycling managers from participating schools. The competition is made possible with the sponsorship support of the Alcoa Foundation, The Coca-Cola Company, SCA AfH Professional Hygiene, Waste Management, the American Forest & Paper Association and HP. Program management is provided by Keep America Beautiful with additional program support from the US EPA’s WasteWise program and the College and University Recycling Coalition (CURC).

“Colleges and their students are leading the way towards a more sustainable future, and RecycleMania is a perfect demonstration of their energy and commitment,” said Matt McKenna, president and CEO of Keep America Beautiful. “KAB is pleased to support the RecycleMania program. We celebrate this year’s results and congratulate every school and individual that participated.”

“We’re proud to support RecycleMania and congratulate all the students for taking small, but meaningful actions to preserve the planet,” said Paula Davis, president, Alcoa Foundation. “In the U.S., we have an enormous opportunity to improve our environmental footprint by recycling more of what we consume. When recycled, a can of soda is back on the shelf in just 60 days.”