News: Journeying to Haiti: a personal account of the country regaining its strength with Eric Mun 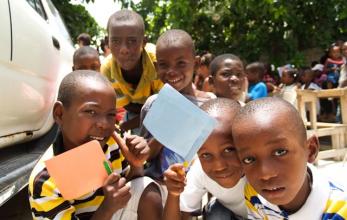 Upon returning from Haiti in September 2011, I sat down with Eric Mun, a member of City on a Hill church, for an interview in the hopes that with his experience he could take us—even just for a little moment—to what the country is now like as it regains its strength. Words of optimism and progress can be found easily in many prominent articles chronicling the aftermath of the earthquake. Yet, I could not help but yearn for more details about the country, its people, the landscape, and so on. In a sense, these questions were designed to have Eric paint for us, with his words, the things he witnessed and emotions that transformed him. By the end of our interview, I sense that Haiti has in its grasp a unique opportunity to transform itself according to a new collective vision.

Take me back to the moment you landed and stepped outside the airport, what was your first impression?

More than anything I remember a sense of excitement. As soon as we got our bags we met up with our (Foursquare Church) team leader. Right away, there’s locals grabbing your bags and they’ll insist on getting a tip. And then the traffic, it took about 30 to 40 minutes going to the base camp. The traffic was intense. It’s basically a normal road—it’s paved for the most part, no lines, no traffic signals so a road that’s a two lane road will all of a sudden become a three or four lane road. If you hit a car, you drive away as fast as you can, that’s just how it is there.

Haitian authorities said “earthquake-hit populations have adequate access to food and medical care and most students have returned to school”, what is your response to that statement?

For someone to read that in North America or Canada—you got to take it from a Haitian point of view. Maybe adequate to them is if you have the money you have access to school. That is how it is in Haiti. If you have money you have access to school. If you have money you have access to health care. Even in the United States which is one of the richest countries in the world, there’s still hundreds of thousands if not millions of people who can’t afford health care. So in Haiti, you can only imagine that the very rich, and the very few can actually afford proper health care and proper education. And so I’d have to disagree. Even for us Canadians and Americans in our wallets we have more than a year’s wage for the average Haitian just as traveling money and if we had a serious illness, if we had to go for surgery or any sort of trauma anything that was a serious medical condition, we would actually have to get flown to Miami. There’s nothing for us in Haiti there. It’s simply not true that there’s adequate health care and education for the masses.

Were you ever afraid for your safety?

Surprisingly no. Going into Haiti my heart, my mind had all these things ‘oh it’s going to be heartbreaking, it’s going to be difficult, it’s going to be conflicting, painful and dangerous’. So I was reluctant on bringing things like my camera, but once I got there—it’s amazing. The Haitian people are just amazing; they are the most genuine, loving people I’ve ever met. And coming from Vancouver where people around the world think it’s a beautiful place, beautiful people, and one of the friendliest cities in the world. But compared to the Haitians we are [not even close]. Most of them [are] living in poverty with what seems like nothing to look forward to and living alone. But you meet the children, and they are just so affectionate, they’re so easy to fall in love with. It’s not just the kids, it’s the adults too. I’m driving down the street on the back of a pick-up truck, Korean-Canadian, and clearly out of place, clearly on missions or humanitarian work. The Haitian men, grown men would be pretty somber walking down the street. And then you wave at them, they’d look up and their entire face would just brighten up and they’d say ‘bonjour’ and everyone is just so happy to meet everyone and interact. You get a real sense of community and people who love humanity.

How about the level of street litter?

We’d drive around the street and every couple of blocks or so you’d see garbage fires. Pits of garbage on fire, that’s how they [dispose] their garbage. We were doing a kids camp one morning and we actually had to vacate the building because the property next door was burning garbage and smoke was coming into our building.

How frequent was it?

It’s constant. If you got a good view of the city at any one point, you’d see 20 or 30 small garbage fires. But they’re controlled. They’re either in pits or dumpsters. Besides that, we went to one orphanage in a district in Port-au-Prince, which was supposed to be upper class. I was surprised because it didn’t seem cleaner or more organized. It just seemed more chaotic. One of the Haitians there told me the way you can tell a upper class city from a lower class city is that an upper class city will have street signs. Like signs that say the name of the street. [It reminded me] of the things we take for granted. There’s this one company called Digicel, they’re a cell phone carrier, all the street signs are from Digicel, it’ll say DigiCel at the bottom of the street sign. There’s posters and billboards and it’ll say Digicel. It seemed like the airport was sponsored by Digicel. Apparently they’re the biggest cell phone network carrier in that part of the world.

The Interim Haiti Recovery Commission says that debris removal & management is key to rebuilding, what was the level of debris you saw?

The places that we went there was a lot of debris but it wasn’t overwhelming. It wasn’t like you couldn’t drive through this road because there’s a pile of rocks. There were a lot of crumbled buildings that was unsafe to house anyone. You’d drive down the street and five out of eight buildings would be unlivable. There will still be people living in them but they shouldn’t be livable. There will be rebar sticking out of the roof and parts of walls that have collapsed. Most of the buildings are made out of brick so it’s easy to see the damage.

Did you at least see removal crews?

No. Not really. There wasn’t a whole lot. It didn’t seem like there was an immediate need to get rid of the debris. Rebuilding was definitely an immediate need. But more than anything I think what they need most [are] the basics. They need adequate food, water, education, and shelter.

What have you learned from your experience, any unexpected lessons?

It stretched me to go to Haiti. Physically it was demanding. But as a man, it gave me a new appreciation for not just the cliché things like how blessed we are to have so much here but it opened my eyes to how good people are. And I’m not talking about us, humanitarians or missionaries; I’m talking about the Haitian people. The Haitian people really moved me with the amount of joy, the amount of love that they live with. And the amount they give with anyone who is willing to be there. It opened my eyes how much the Western world, the first world have to learn from the third world. We have a lot to learn from Haiti, not really the other way around. When it comes to government, yes Haiti has a lot to learn. But when it comes to humility, that humanness of life we have a lot to learn from Haiti. They haven’t lost their touch.

As a Christian, before going into Haiti I was in a bit of a rut, a little bit depressed, angry, just not loving life, almost an underlying sense of loss of hope. When I got to Haiti I saw God move in such amazing obvious God-like ways. I’m a very logical, skeptical, analytical person. And one of the things someone there mentioned was that we shouldn’t limit God and his power and his abilities to our own mind. We shouldn’t dissect it and understand it because it’s so much bigger. Even if you claim you’ve figured it out –you don’t have it figured out because it’s so much bigger than what you can even begin to understand. I had to really learn to let go, stop questioning my own abilities, God’s abilities, second-guessing every move. I kind of pray about it and expect it. That’s how I lived while I was in Haiti. And that’s how I live now.