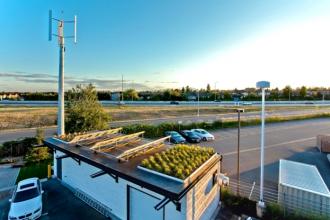 “Hey Pete, you got any more of that honey left?” asked one worker during my tour of BMW Auto West in Richmond.  The dealership produces and harvests its own brand of honey and sells it to its employees for less than half of what you would pay in a store.  Clearly, this is not your typical car dealership.

The dealership, built in 2007, was designed to integrate green strategies from its inception, through a geothermal energy system (for heating and cooling), a water catchment and recycling system, and a green roof to help insulate the building and also reduce storm water runoff.  Unfortunately, the garden saw the loss of 60% of its plants after the first two years, so in 2009, they redesigned the garden to how they really wanted it to be—a process which opened the floodgates for many other possibilities to be integrated.

To date, the dealership boasts two 4,000 gallon tanks that collect and filter rainwater for irrigating their plants.  They reclaim, filter, and reuse 90% of the water from their car wash.  They recently constructed a recycling building that has been outfitted with 9 solar panels plus a small green roof.  They have two compost bins that take food scraps from the kitchen and turn it into food for the garden.  They have also recently installed BC’s first commercial-scale vertical-axis wind turbine, made by Cleanfield Alternative Energy Inc., which can provide up to 3.5kW of energy to help them cut down on energy costs.  The list goes on.

These initiatives are largely due to the President, Joachim (pronounced JAW-kim) Neumann and the work of Pete Sargent, project manager for the company.  The two have known each other for over twenty years, and Pete describes Joachim as a visionary who wants to do the right thing simply because it is necessary to do so.

Pete says that the company’s investments (they have already invested over $1.5 million dollars) have never been about getting a financial return, which makes sense considering that alternative energy is costly and it can take on the order of decades for the technology to pay for itself.  Rather they are doing this because they know that someone needs to step up as a leader to show what can really be done. Thus, Pete’s role is to try and take Joachim’s ideas and bring them to life, and this has led him into a number of interesting directions that are certainly not typical for a man in his line of work.

For example, Pete took a six-week course on apiculture (beekeeping) through Kwantlen Polytechnic University in order to set up the three hives that now boast approximately 150,000 honey bees atop of the dealership’s roof.  Not only do the bees provide the necessary pollination for the garden’s fruit trees and other pollinating plants, but Pete acknowledges it is also a response to the growing problem of colony collapse disorder (CCD) and the worldwide decrease in bee populations.

Having worked so closely tending to the bees for a few hours every week, Pete has become somewhat of a “bee-whisperer” and can spot how the bees communicate with one another.  Apparently, when bees find a good source of pollen they do a figure-eight dance to tell the other members of the hive where the source is located.  Of course, to the uneducated eye (e.g., my own), the bees simply look like they are buzzing about in a rather haphazard manner, reminiscent of people shopping during Christmas time.  But they seem to know what they are doing, as Pete was able to harvest approximately 75lbs of honey this year alone.

Next to the bee hives is a miniature orchard that contains a small number of apple trees, which have been grafted so as to produce six different varieties of apple per tree (yes, such things exist).  Pete plucked a McIntosh right off a branch for me to enjoy.  Talk about growing locally.  If there was ever a contest for who could get food from the most unlikely of places, I have a feeling that I would win.

To date, the garden contains roughly 3,500 plants, including a variety of fruit-bearing plants (blueberry, red currant, apples, etc.) and flowering varieties (lavender, Echinacea, pink carpet roses, etc.), which bloom from March through September.  There are also wild strawberries, which, according to Pete, aren’t supposed to produce fruit yet do so anyways.  This seemed like a great metaphor for their business, which currently isn’t supposed to be green, yet is leading the parade in spite of this.

The garden was successful enough to be featured as one of the tour locations for CitiesAlive 2010, the Green Roof and Wall Conference. 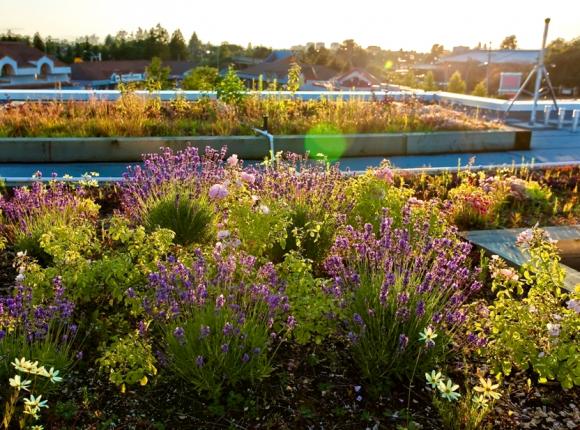 (Garden in full bloom atop the dealership's roof)

Employees are very supportive of what their company is doing, and they have been getting involved as well.  Employees can not only enjoy some time outside some sun while on break, but they can also volunteer their time tending to the garden as well.  In the near future they will add individual plots for employees to grow their own plants, essentially following a community gardens model.

The next phase of development will be the most ambitious project to date.  They are set to install approximately 170 solar panels on their soon-to-be-constructed Mini dealership that will be located directly beside the current dealership.  They hope that the panels will help take care of things such as lights, computers, and the building’s “ghost power,” referring to the power that appliances use even though they are turned off.  As a scale, the power generated by this system would entirely offset 6 electrically heated homes in BC for one year.  The new building will also feature a number of green walls, which not only carry the benefit of insulating the building, but also add a great amount of aesthetic appeal by creating vertical green space.

Pete remarked that although they are very committed to their initiatives to be leaders and are doing so without government help, he wishes that there were more incentives in place to make it easier for businesses to make these types of investments.  He said that despite their motivation to do more, there are a great deal of bureaucratic hurdles to jump through in order to get projects underway.

One initiative that they are currently pushing hard for is an end of use car parts program.  Such a program would save a whopping 50% of old car parts (plastics, metals, etc.) from entering the landfill.  Such a program would have an incredible positive impact on the environment if began to be adopted worldwide, and change our throw-away society to one that starts reflecting a closed-loop system.

“Ideally, we want to get it to the point where customers see that we are doing the right thing, and that is why they want to do business with us.”  That is one of the main points that Pete kept driving home—that it isn’t about money or getting positive recognition, but rather that it is first and foremost the right thing to do.

“We want to evolve what we are capable of, regardless of the cost.  We want to show businesses and communities that you can do something different to benefit the world.”

Great story Sean!  Thanks.  Interesting and informative piece you've written (nice pictures too). I love the bee colony initiative.  It's encouraging to see the kind of transformation undertaken, simply because it's the right thing to do.  It would be interesting to measure or assess the various changes, if any, in employees and customers in response to the changing environment at the dealership.