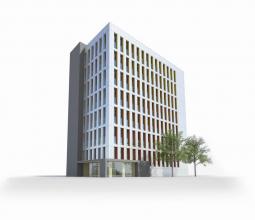 Chasing the Idea of Wooden Skyscrapers
By Klaudia

SustainablityTV reports on the progress of revolutionary construction projects from all over the world. This time we stop in Austria.

In 2009, the construction company CREE (Creative Renewable Energy and Efficiency) announced that it was going to build the tallest wooden building. CREE operates in a number of countries including the UK, the US, and Austria.  At that point in time, the project didn't have a location, and it's viability was questioned by many (the author inlcuded).  In many ways, this project was to be an experiment to strech the limits of what was possible to build with wood, but also to prove the viability of wood for the construction of high-rise buildings.

So far the choice for building materials beyond four or five stories has been reserved almost exclusively for the steel and concrete.  However the LifeCycle Tower is, questions that notion with some engineers claiming that wood may be viable as the main structural element for buildings up to 30 stories.

After many months of planning the city of Dornbirn, a city in Austria, close to the borders to Liechtenstein, Switzerland and Germany was finally chosen as the location to build the wooden office tower. September 2011, marked the official groundbreaking ceremony and in April 2012 (just seven months later) the roofing ceremony marked the full height of the eight story building. 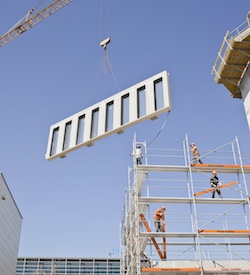 CREE's "LifeCycle Tower system" ("LCT") is made from prefabricated units made form high performance wood. The company is planning to expand and build further LCTs in numerous locations overseas. To keep the carbon footprint as low as possible local wood (timber) is used. According to the CREE website, "LCT One" in Dornbirn has a carbon footprint that is 90 % lower than buildings of similar height, using wood minimizes noise and dust pollution, and incorporates other sustainable technologies such as geothermal and solar energy.

Critics fears of wooden office towers seem to center around the flammable nature of wood, and the strength of the wood as a structural element.  CREE members feel they have addressed this concern by laminating the wood in a special crisscross manner. Flammability tests were made where the ceiling was exposed to 1,000 degrees Celsisus for 120 minutes. The results? The building was certified to meet Austrian fire-safety standards (“Zertifikat REI 90”). It seems the crisscross wood maintains its stability longer than conventional material, which with the addition of sprinklers throughout the building makes the building safer for both the inhabitants and firefighters as well.

CEO Hubert Rhomberg is hoping that this can be a stepping stone to bring wood as a renewable building resource back into urban areas. When asked whether he hopes to set a trend with LCT, he replied: “Until today everyone says that won’t work. But we want to build 60 meters and higher in wood. We will prove that it works and once we’ve done that, others will follow automatically.” (http://video.vol.at/vorarlberg/rhomberg-bauprojekt-lifecycle-tower-hochh...) According to Rhomberg the construction industry demands 40% of the world’s resources and “that’s why other solutions have to be found.” (http://www.youtube.com/watch?v=oRUHuCcI3V0 – 99 seconds for the future of Green Building)

Now the international showcase project is nearly done and looking for green companies to rent out the sustainable office space. 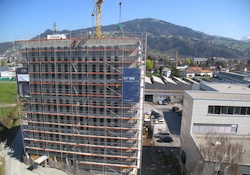 If you would like to see the latest image of the building progress or just want to know more about the LifeCycle Tower in general, check out this link: (http://www.cree.at/index_en.php). pictures are updated hourly.

The latest "LCT One" news can be found on the CREE blog (http://creebyrhomberg.blogspot.co.at/ ) (in German).

An interview with one of the leading members can be found here (http://www.youtube.com/watch?feature=player_embedded&v=FbTnkFoXmP4).

More information on the company CREE by Rhomberg is available here (http://www.creebyrhomberg.com).

Sustainbility Television® will keep you updated on the progression of the LCT projects.

I would love to build a wooden hi-rise.
When can I start ;0)