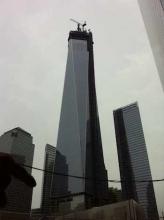 I recently returned from a trip to New York City. It had been years since I had walked the streets of Manhattan… and over a decade since I last passed Wall Street. As a break from a relaxing Sunday morning in Long Island, my brother-in-law took me to his job site at Ground Zero. I was surprised—it looked nothing like the massive Trade Towers that I had seen in August 2001, two weeks before The Towers went down. It felt different too.

An elaborate reconstruction project, “The Freedom Tower” and it surrounding complex stands in the place of the Twin Towers as a symbol of a profound moment in American history. In construction since 2006, The Freedom Tower will be North America’s tallest building at 1776 ft. Its surrounding Museum, park, buildings and Shopping Concourse should be completed in 2013. I’m sure it will be worth the line-ups to see when it is complete.

Though certainly a beautiful vision, with some intricate architectural features, a few things crossed my mind as I learned more about the project through my discussion with my brother. Like so many ambitious projects of the past, The Freedom Tower has not been immune to change, delays and dwindling funding and resources. In “Companies use World Trade Centre as rental bargaining chip” Ilaina Jonas explores the challenges involved in achieving full occupancy of the buildings. As a result of low occupancy and rising construction costs, the Tower’s surrounding buildings have been scaled-down and redesigned. What might that occupancy look like though, I thought to myself, if we thought about business itself in a different way…?

As I stood beneath the symbolic tower I wondered to myself:

Who will fill this epic ‘tower of freedom’ and how will their work represent freedom?
Who will hold them accountable to this bold vision and… how?
Will this bold vision be the new standard, or… a reconstruction of old habits and practices?
What opportunities might we gain by rethinking business in this symbolic landmark of innovation in world trade…?

Having learned so much about social entrepreneurship in the last several months through my friends, mentors and fellow global intrepids (e.g., Jason Robinson, Elisha Muskat, Adele Madonia, Kevin Keystone, etc.), I am certainly now more aware of the possibilities that social enterprise can offer individuals, companies and communities worldwide. Social entrepreneurs are changing the way we think about profit, progress, development and investment by setting an example and experimenting with business innovations that many have not yet considered.
I wondered…

What would be the result of a building full of social entrepreneurs??
What could that mean for society?
What might that feel like?

If we changed the ethical fabric that lines and warms the Freedom Tower, could we change the fearful concern “Will staff be uneasy moving to a place that was the target of such a horrific attack, as well as the 1993 truck-bombing? Despite very tight security, could the WTC become a target again?” to one of confidence, optimism and good will?

As I gazed at the 2nd building under construction, I imagined the day when there would be enough successful social enterprises leading commerce globally to fill it to match its twin, The Freedom Tower, as a renewed vision of global commerce and a commitment to global freedom. I imagined the day when freedom may represent liberty not just for an individual, but for their global neighbours as well.