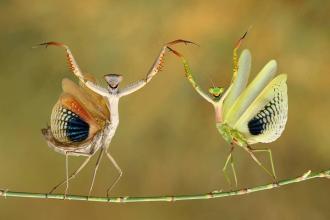 We witness amazing wildlife exploits here every day...  I have bats in my belfry, literally as well. Our porch rafters actually hold a family or two up there. They curb the mozzie population, get free rent and i sweep up their dry flaky droppings every day. It broke my heart when they pushed a tiny baby out of the nest but nature is funny like that sometimes. Turns out I should not judge them, I was not much better at raising their rejected infant than they were. We have been using their guano in the garden, an old trick I found out about decades ago in Jamaica.

We have a family/gang of medium to giant size lizards that either live on my roof or just party up there, I am not quite sure which. They make a crazy racket but somehow you get used to the comings and goings on up there as they race up and down the lime trees on both sides of my house. I only chastise them when they take one bite out of a lime, chuck it on the ground and don't eat the whole thing. Maybe the Scottish in me does not like to see good food wasted. For about a year I was certain they smuggled a drum set up there or were operating some kind of orgy/ bordello business on our deafening metal roof. Turns out they are just on a different schedule than me.

The howler monkey's love the two giant trees close by and posses an innate talent of making themselves heard at opportune times. They call to me few times a week, mostly at 4am, as if to tell me I am missing the best part of the day. Some say the pint sized gorillas believe their larger than life vocal expressions at early morning hours bring up the sun. I felt like that a few times in my university days... It is amazing to witness such a big sound come out of such a tiny creature. Cute bare pink butts and giant gonads are some distinctive qualities they comically poses. I was once lucky to witness two tiny infant hanging face to face, upside down by their tails going toe to toe in a relentless primate boxing match. Mom eventually broke it up before a winner was crowned.

The squirrels here have racing stripes down their backs and love the royal palms on the property. They would put a cirque du soleil performer to shame and they always work without a net, but I have seen a few miss the mark and thump to the ground. Remarkably they bounce up quicker than I did in freshman football when I was trying to make varsity. Our caretaker has new playful kittens. They seemed to have intimidated the mice that visited us for a little while. Even some guests will feel the need to move on eventually.

The magpie demeanor of the giant blue jay's is hilarious as they try to eat the fruit inside my kitchen and torment my pooch for her kibble. We talk back and forth. I am not sure what I am saying to them with my whistles but they seem to agree with me most of the time. The vultures stop by once in a while, drawn in by the smell of dogs bones scattered about. They are not so attractive up close and I certainly wouldn't want to smell their breath, but iI must say they are divine when they soar on the trade winds overhead. We are at the tip of remote peninsula and they along with the pelicans hover effortlessly in the sky above looking for the next meal or mate....

The loose saddle horses across the street are kinda free range and seem wander through the yard almost as often as my neighbors chicken. I have discovered a few snakes outside and scorpions and a couple of tarantulas inside our lovely casita. Treading lightly upon the earth, knowingly planting each step like a walking meditation is good policy for life in general. This skill has come in especially handy living in the jungle. The little tiny lizards put on quite a show hunting around the bare light bulbs every night, capturing prey with the patience and ease of 10,000 years of practice.

The Purple and Orange 'suicide' crabs migrate through a couple of times a year and will swarm into your house if you leave the door open. They have an unfortunate habit of getting squashed on the road... They seem to thrive on the challenge of trying to bite the tires of on coming cars with raised open claws. We all face different challenges on our journey, it is fortunate I guess that they have power in numbers. I am probably leaving out a few more entertaining species of local critters but that is what I see and get to experience on a daily basis just at my house, hanging in my hammock on the front porch. It's even more mind blowing what i see when i go out in the deep jungle or into the park land...

The royal blue butterflies and the hummingbirds help keep it real as they have their own unique effortlessness about them... Nature is Bliss, support it, enjoy it, protect it, nourish it, roll around and revel in it as much as you can. We have taken a lot from the mother earth and she just keeps giving back despite our nearsightedness. With all of the Bombs and nuclear power plants we have created it is amazing we have made it this far as a species. We are still so primitive in so many ways. We as the top primates have to take responsibility to govern the future of the planet.

"When you are in doubt, do only that which benefits the Earth..."

If we were a more advanced species this would be the 1st Commandment. In yoga it is the first commandment, Ahimsa a.k.a. Non Harming. Not to worry, it is the top priority for a lot of us and we shall be heard. Move towards earth causes, earth people and sustainable events and communities.

Stay close to nature, however you can, wherever you are. That is where God/ spirit / source energy resides. Love the animals... All of them. If you are thinking of a good place to thaw out this winter, consider Costa Rica. All natural power, no military or nuclear anything, strong Organic communities, banned GMO's, some of lowest crime rates in the Americas and the most protected parkland of any country per size, 23%. Try to travel to and support a country that does not partake in war!! There are 23 all over the world. Google it! BIG Love!!! It just feels different here... Pura Vida!!!!