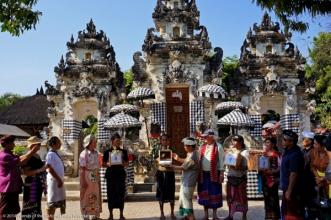 Under protection by traditional law, the Bali starlings are released by FNPF at this local three islands haven – Nusa Penida, Nusa Lembongan and Nusa Ceningan - now known as Bali Bird Sanctuary established by FNPF in 2004 to provide a protected habitat safe from wildlife traffickers who had almost poached the Bali starling (Leucopsar rothschildi) to the brink of extinction from the wild in its native Bali.

Members of the UK-based Durrell Wildlife Conservation Trust the conservationists visited FNPF on Nusa Penida for a ceremonial release of four Bali starlings – registered as Critically-endangered on the 2014 IUCN Red List of Threatened Species -  during a ‘Critical Species and Islands-at-Risk’ expedition on board MV National Geographic Orion through Borneo, Bali and Komodo.

Researching environmental issues and conservation programs working to save endangered species in threatened global ecological hotspots, the Durrell Expedition team commended the Head of Klungkung Regency and local government officials in attendance for the recognition of this important island bird sanctuary now under approval process as protection under legal legislation.

“The Bali starling is much loved around the world and we can see the way you are working with the local community to protect the Bali starling will lead to great success – you will save the Bali starling,” Lee Durrell, Honorary Director of Durrell Wildlife Conservation Trust told Head of Klungkung Regency, I Nyoman Suwirta during a ceremonial speech at the FNPF Nusa Penida conservation centre.

“It’s a good example to the rest of the world that you’ve got to respect the local traditions, and work very closely with local people to succeed – it’s not easy, but usually works,” said Lee Durrell, who had heard of the work of Dr Bayu Wirayudha and FNPF to save the Bali starling - waiting for two years to meet him on this expedition and attend the release ceremony on Nusa Penida.

Success of the FNPF Bali Bird Sanctuary conservation program has seen the protected Bali starling population on Nusa Penida increase to over 100 from less than 10 birds left in the wild.

“Importantly, local government is now more aware of working with communities to protect our wildlife habitats and strengthening legal protection which will bring sustainable benefits by attracting ecotourism,” he said.

“One of the main reasons we came on the Durrell Expedition was to release the Bali Starling - and now with this bird sanctuary here it seems conservation is working, which is really good news”.

About FNPF
FNPF is an Indonesian conservation non-profit organization based in Ubud, Bali working to protect wildlife and its habitat, at the same time as supporting local communities. Begun in 1997 by Dr Bayu Wirayudha and a team of volunteers, our conservation projects in Bali, Nusa Penida and Central Kalimantan, Borneo are designed to be holistic, sustainable. FNPF conservation work is internationally recognized by organizations such as the United Nations Development Programme, the Whitley Fund for Nature, and the Rainforest Action Network. See: www.fnpf.org

Be a conservation volunteer - Bali or Borneo!