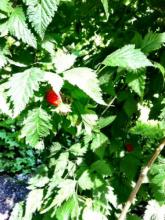 I see a world where everyone grows plants without chemicals, the way we Earthlings have done successfully for many thousands of years.

My Dad Arran would take us kids for long hikes in the Westcoast Forests.  If it was around June or July, we'd eagerly search out Salmonberries (rubus spectabilis)  in the moist rainforests.  They are like wild raspberries of the woods.  Plucking their gentle softness was gleeful anticipation of when the fruit would erupt onto our palettes.
Nancy Turner, Godmother of our Garden, suggested that we plant salmonberry and thimbleberry bushes as part of the effort to restore our garden's native ecosystem.   That was the best suggestion ever.  Before that it hadn't occurred to me that we could plant these *wild* plants.  It was exciting and empowering to decide what plants to grow.  Our ordered bushes are on their way: Nootka roses, thimbleberries, salmonberries, Garry Oak ecosystem wildflowers and several indigenous ferns including maidenhair and deer ferns.  Everything on my list so far.  Except for hairy honeysuckle.  This is a plant so rare that it's not sold in regular stores.  I will hunt for it!

Restoration ecologists are beginning to grapple with 'novel' ecosystems as I heard Biologist Eric Higgs lecture about recently.  Novel ecosystems are ecosystems that have been so significantly and irreversibly altered by invasive species that there is no benchmark, no reference and no way to put something "back".  Prof Higgs said, "We see history as anchors that tether us to a particular past".  What to do when those anchors are gone?  I see many parallels socially and culturally.

I was talking to my brother Arjan about our desire to turn the garden back (without being a total purist, without sacrificing mature Japanese maples and rhodos).  Arjan teaches gardening classes and has given the matter some thought.  He said, "species are continually evolving, plants and animals are always moving.  If we were to go back , we'd not have all the varieties of vegetables that we love and use."  That’s a good point.

However, Arjan agrees with me that preserving diversity is important.  It's fundamental.  The theory of mono-culture (growing huge amounts of any one agricultural species) goes against every biological principle.  This misplaced mono-culture theory is only one of the reasons most biologists oppose GMOs.  Just because we have the technology (to mix up the genes of our  foods and sow only a few varieties which we drench in toxins) doesn't mean that we should do it.  Lond termstudies have shown that over the long run, organic agriculture yields just as much as conventional.  David Suzuki on GMOs: “Anyone that says, ‘Oh, we know that this is perfectly safe,’ I say is either unbelievably stupid or deliberately lying.”

The way of the future is through increasing biological diversity.  Increasing, not limiting agriculture to the planting of a few particular varieties.  As a counter to the monocrop madness created by folly and greed, I garden.   I rip out weeds.  I also sign petitions, I stand up for what's right and I stand up against what is wrong.

Organic Gardening is an affirmation to the Earth.  It's a connection to Gaia.  it's a pledge of loyalty to the Earth Mother that we will not forsake her gifts; Nay we will receive her bounty,  we will purify her soils and air.  Yes, we humans are ever more culturally mixed and peripatetic,  However,  unlike humans, our geographically and biological distinct pockets of flora and fauna must emphasized, encouraged, and treasured.

Thank you for sharing the great post. Organic gardening now is a trend that many company follows and their product is preferred how to clear cache